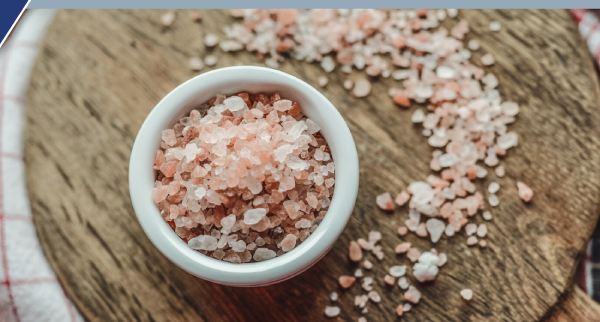 Salt is essential for life. We cannot live without it. The Celtic word for salt meant holy, or sacred. In Roman times, soldiers were paid in salt, and that gave rise to the word “salary.” But today, there is a lot of confusion about salt.

The American Heart Association (AHA) guidelines recommend consuming less than 1,500 milligrams of salt per day. However, in May of 2013, the Institute of Medicine (IOM) disagreed. The IOM said limiting sodium intake to below 2,300 milligrams a day has no health benefits and that low sodium intake can potentially be harmful to people with moderate to severe congestive heart failure and people over age 55 who have high blood pressure. In August 2014, the New England Journal of Medicine published details from two different study groups which essentially concluded the AHA guideline would lead to about a 2-fold risk for major adverse events.

Figures vary, but the IOM says the average person consumes 3,400 mg or more of sodium a day – that’s 1 ½ teaspoons of salt. Most of it comes in processed foods. Even bread and cereal contain salt. Canned peas have 3 times more sodium than frozen peas, for example.

Why so much salt in processed food? Because salt, sugar, and fat are the “trio of bliss” that makes us come back for more. Salt works in tandem with fat and sugar to achieve flavors that grip the consumer and do not let go – an allure the industry has recognized for decades. The presence of salt/sugar/fat stimulates the brain to release dopamine and makes us want to continue eating. The salt/sugar/fat combo turn on the pleasure centers of our brains and turn off the switch that tells us we’re full.

At restaurants, you can get roughly 2,000 milligrams of sodium from just one burrito, a single-serve pizza, or an order of kung pao chicken, and at least 1,000 milligrams from a typical sandwich or burger.

Long before the days of processed food, and before the days of refrigeration, most of our meat and fish were preserved by salting it. Humans have always consumed salt. However, what is different today is that most of the salt we consume is refined salt. Today’s common table salt has little in common with natural salt. Neither the AHA nor the IOM addressed the differences in salt.

More than 90% of the world’s salt is used directly for industrial purposes that require pure sodium chloride. In the oil industry, for example, salt is used to increase the density of mud and soil, which creates a more safe and efficient drilling rig. Salt is also used to de-ice roads.

The remaining percentage is used for preserving processes and ends up on your kitchen table. Refined salt has been dried at 1,200 degrees Fahrenheit. The excessive heat alters the natural chemical structure of the salt. What remains after typical salt is “chemically cleaned” is sodium chloride that has been stripped of most of it accompanying minerals.

Table salt is 97.5% refined sodium chloride and 2.5% chemicals such as moisture absorbents, calcium carbonate, magnesium carbonate, and aluminum hydroxide – added to improve the ability of table salt to pour. Aluminum is a light alloy that deposits into the brain, a potential contributor to Alzheimer’s disease.

The focus is not on health, but on having the salt pour easily from the shaker. After refining processes, table salt no longer combines easily with human body fluids – there is no free crossing of liquids and minerals. This can cause accumulated fluids to stagnate in joints producing edema, kidney and gall bladder stones, rheumatism, arthritis, and gout.

With processed food, the body often receives more refined sodium chloride than it can dispose of. Pure sodium chloride draws water to itself; this water retention leads to edema, high blood pressure, and poor circulation. Also, as the body tries to deal with the excess of sodium chloride, various harmful acids and gall bladder and kidney stones are formed.

Our bodies are designed to receive sodium chloride in combination with other minerals and trace elements as are found in natural salt. Unrefined salt allows liquids to freely cross the 80 trillion or so cell membranes that make up our body. The benefits include:

It is very difficult for your body to absorb too much-unrefined salt since there are powerful and effective feedback loops that regulate this process. Natural salts promote a healthy balance and do not contribute to high blood pressure like typical table salt.

Another thing the AHA and the IOM did not address is salt’s relationship to other minerals, especially its best buddy, potassium. Most Americans are eating too much-processed salt and not nearly enough potassium. Potassium helps keep sodium levels in check and optimizes blood pressure.

Himalayan salt, also called crystal salt, comes from the Himalayan mountains in Pakistan where deposits laid down eons ago. Himalayan Crystal Salt is salt in its native form, with all its vibrational energy intact and it helps promote a healthy balance in your body. Promoting balanced electrolytes helps to keep your body in homeostasis — the balance of chemicals that is conducive to the body’s function.

Blocks of salt are also used as serving dishes and in the grilling of food.

There is a debate about sea salt these days. One argument says the oceans are used as dumping grounds for harmful poisons like PCBs, mercury, and dioxin. Reports of polluting oil spills are more frequent. Thus the same concerns about toxins in the fish we eat apply now to salt that has been dried from the oceans.

The counter-argument says: All minerals are eventually washed into the sea. So the highest concentration of minerals will be in sea salt, and tests indeed confirm that sea salt has a higher mineral content than Himalayan salt. Also, the action of waves in oxygenating seawater and the action of sunlight and marine microorganisms in the sea are known to purify the oceans by breaking down pollutants put into them.

“Thousands of miles are traveled; plenty of time and contact with purifying elements elapses before arriving on the coast of France to be harvested. The proof is that it Celtic Sea Salt has to pass rigid organic standards of the European and Australian Certification for purity. Notice, the water does not come from the polluted coasts of Europe or England as has been suggested by Celtic Sea Salt’s opponents.”

This is another good salt option.

According to the company:  “Long ago, before the earth knew pollutants of any kind, an ancient sea covered what is now Central Utah. Real Salt is sea salt from this prehistoric ocean — harvested underground with a natural balance of more than 60 trace minerals, exactly as nature intended salt to be eaten. We don’t add anything and we don’t take anything away. The result is a natural sea salt with a unique taste our customers love, and reports of health benefits around the globe.”

So when we speak of salt that is healthy for the body, we mean salt in a natural form: unaltered, unrefined. The “table salt” sold in the supermarket is sodium chloride with additives. Most of the minerals have been stripped away.

Beware of products labeled “sea salt” that are not truly unrefined sea salt.

Craving salt is a classic sign of poor adrenal function – adrenal fatigue. The adrenal glands release multiple hormones, the body’s messengers. One of the hormonal changes in adrenal fatigue involves a drop in aldosterone production. Manufactured in the adrenal glands, this hormone tells the kidneys to reabsorb sodium that passes through them, increasing the amount held in the body. This action helps control the amount of water held in the body, as sodium osmotically holds fluid in the space outside of cells. When aldosterone levels drop, so too does sodium retention in the body; this can result in dehydration, frequent urination, low blood pressure, and dizziness upon standing. Because of the sodium losses that occur in adrenal fatigue, those with adrenal fatigue often need to significantly increase their intake of minerals and this shows up as a craving for salt.

Unrefined salt is beneficial to adrenal fatigue sufferers because it contains dozens of essential trace minerals which the adrenal glands need for good function.